More than 30 different pathogens are known to be involved and eight of them are linked to the greatest incidence of STIs:

A number of diagnostic strategies and tests, of variable quality, are available for the individual pathogens. The first four are currently curable bacterial infections, whereas the latter four STIs are incurable viral infections, but the signs and symptoms can be reduced or modified through specific treatment. Double infections frequently occur, such as HIV and syphilis, or gonorrhea and chlamydia together.

These types of infections often do not have any signs (90%) or can be present only with mild symptoms. However, the consequences of STIs are severe: i) fetal and neonatal diseases, ii) genital neoplasia, iii) infertility. In 2016 almost 1 million pregnant women were infected with syphilis, resulting in over 350,000 adverse birth outcomes including 200,000 stillbirths and newborn deaths.

As already stated above, the transmission of these pathogens is by direct contact with infected anogenital or oral mucosa, thus through unprotected sexual intercourse, or via blood or saliva. During sexual contact, ejaculation does not have to occur to acquire the infection from an affected person. It could also be spread from a mother to her baby during fetal life or at childbirth. Transmission cannot occur through contact with personal belongings.

The best prevention advice is the protected sexual intercourses, thus the use of condom, which could highly reduce the infection rates of these pathogens! 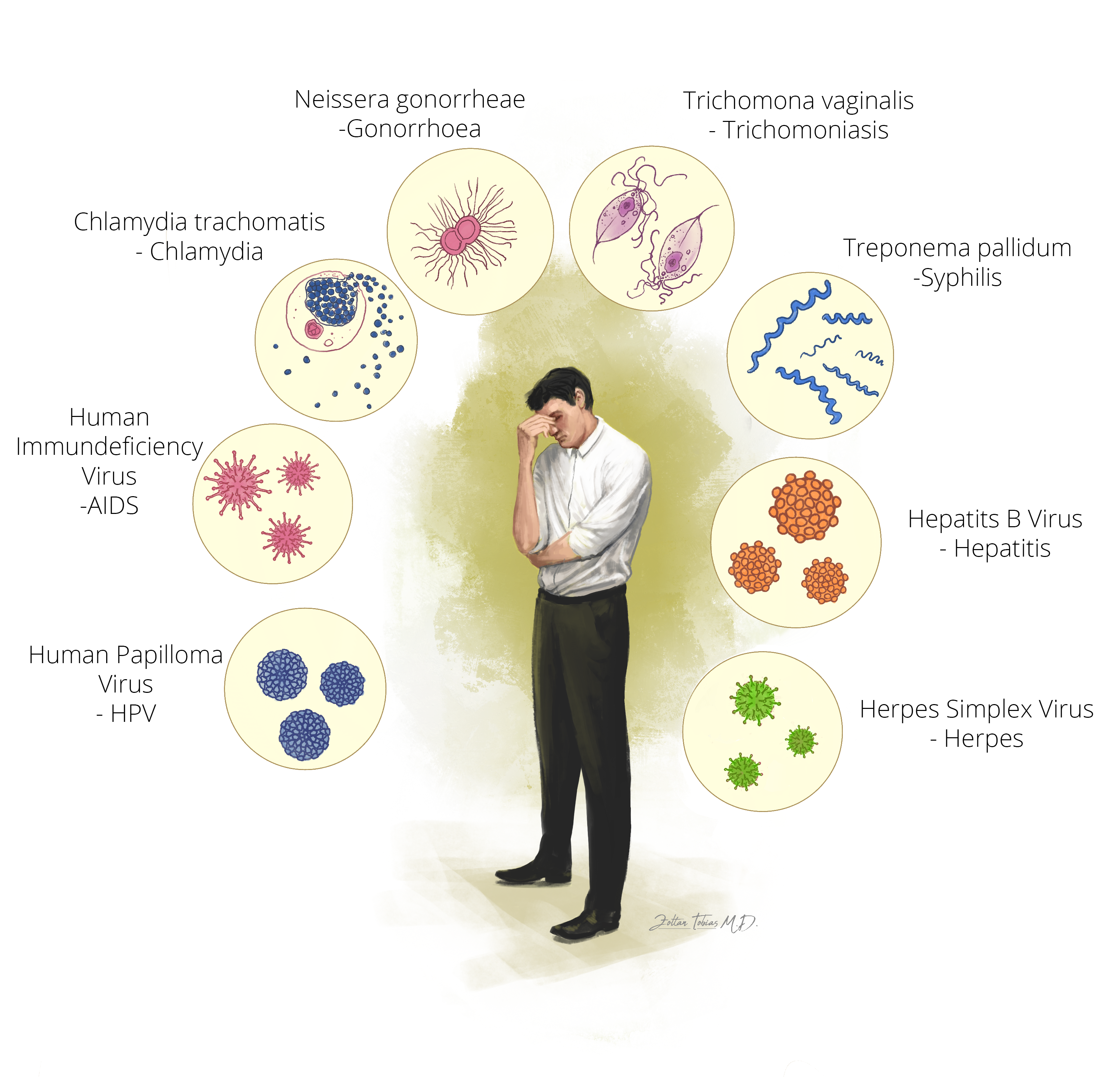 The bacterium which is responsible for syphilis, –previously called as lues, hard chancre, or the French disease– is Treponema pallidum.

The disease course may be divided into early-stage syphilis, which is the first year after infection, and to late-stage syphilis, which includes all phases after the first year. About 9–90 days (3 weeks on average) after infection, a painless ulceration with a firm border (“hard chancre”) develops on the part of the body that was in contact with the pathogen (vaginal, genital, anal, oral, or pharyngeal regions). The ulcerations may remain unnoticed, because they are often very small or located on less visible parts of the body. Usually they heal after 6 weeks, even without treatment. After, in late-stage syphilis, the germs (treponemes) can spread in the blood. Affected patients may have generalized symptoms such as loss of appetite, sometimes fever, or muscle, bone, or joint pain, as well as liver enzyme elevation (transaminase levels) on serology. Regarding the skin manifestations, initially a non-pruritic rash (“roseola rash”) can be seen, which heals without scarring. Later, multiform rashes could develop. In some cases, the mucous membranes, or the palms of the hands and the soles of the feet (palmoplantar syphilis), or the intertriginous areas (axilla of the arm, anogenital region, skin under breasts and between digits) are also involved. All of the skin lesions developing in later stage syphilis contain the pathogens. Transmission of the pathogen is hence possible. Late-stage syphilis may persist long, with oscillating symptoms. Occasionally, in severe and advanced syphilis, gummas can develop, which are soft, non-cancerous lesions with a firm, necrotic center surrounded by inflamed tissue. These granulomas may also ulcerate and affect any organ. They usually appear on the skin, in the bones and in the liver and could cause fatal complications. In late-stage syphilis, central nervous system (neurosyphilis) symptoms might occur, such as meningitis, cranial and peripheral nerve abnormalities, progressive paralysis, and psychiatric symptoms.

The standard treatment for syphilis is penicillin, which is a type of antibiotics. It is highly efficient and can be used in in all stages of syphilis. Regular clinical and serological follow-up should be performed for all of the patient affected by syphilis.

The germ causing this disease is Neisseria gonorrhoeae. Its peculiarity is that people do not develop immunity to gonococcal infection due to its variable superficial antigens. Thus, reinfections are possible and common.

Anorectal gonorrhea mostly occur without, or with light symptoms. Possible symptoms are bloody or mucus-coated stool, discharge, urgency, tenesmus and pain. In some cases, skin irritation and eczema in the anorectal region may be present.

Pharyngeal gonorrhea is often asymptomatic also, yet it is one of the largest pathogen reservoirs.

The available treatment regimens, including a dual antibiotic therapy, are highly effective. A clinical check and a control culture should be carried out after 7 days of medication. The treatment of the partner is advised to avoid ping-pong effect (reinfection).

The bacterium which cause this infection is the Chlamydia trachomatis. It has various subtypes (serovars) leading to different clinical manifestations. A common sign is urinary tract inflammation, in men who are infected by the classical, sexually transmitted types. It presents with a glassy, sometimes purulent urethral discharge and occasionally, pain, prostatitis and rectal inflammation. Women tend to be asymptomatic, but serious complications, such as pelvic inflammatory disease (PID), infertility and ectopic pregnancy may occur.

Serological tests can identify various chlamydia trachomatis types and once it diagnosed it can be treated with antibiotic therapy.

The disease causing germ is the Trichomonas vaginalis, which is a one-celled protozoan organism.

Men who have trichomoniasis are typically asymptomatic. In case it presents with symptoms, the typical clinical manifestations are irritation of the penis, discharge, pain and burning during urination or after ejaculation.

It is treated by a special type of antibiotics. It is important to note, that patients under treatment should not consume alcohol while taking the drug and up to 24 hours after taking the last dose.

The responsible pathogen is the Herpes simplex virus (HSV), which is a double-stranded DNA virus. It is classified in two types : type 1 is known as herpes labialis, which usually affects the lips; and type 2, called as herpes genitalis, which usually affects the genital region. After the first infection, the virus persists in the nervous system of the infected person, sometimes without causing any symptoms.

Treatment of the facial infection is usually local, a cream which consists antiviral agents. Whereas for severe and genital infection a systemic antiviral treatment can be applied.

The responsible virus is the Human immunodeficiency virus (HIV), which attacks cells that have a crucial role in maintaining normal immunity. It spread by contact with body fluids of a HIV infected person, or through sharing injection for drug administration.

The clinical manifestation of HIV is variable depending on the stage of infection. In the beginning,  people may experience no symptoms, or mild symptoms, such as influenza-like illness including fever, headache, rash or sore throat. Later, as the infection progressively weakens the immune system, they can develop other, general signs and symptoms (weight loss, fever, diarrhoea and cough). If the affected person left untreated, HIV can lead to Acquired ImmunoDeficiency Syndrome (AIDS), resulting in much more severe states.

Unfortunately, HIV is still incurable, however, by taking HIV medicine (antiretroviral therapy) the symptoms can be reduced.

Besides the use of condom, another efficient prevention option is the HPV vaccination, which is recommended in the majority of European countries, both for girls and boys.

Hepatitis B is a viral infection that affects the liver and can cause both acute and chronic liver disease, which could result in a potentially life-threatening condition. Usually, newly infected persons do not experience any symptoms at all. However, in some cases acute illness with yellowing of the skin and eyes (jaundice), dark urine, extreme fatigue, nausea, vomiting and abdominal pain can occur. In severe forms, acute liver failure or liver cancer can develop, which may lead to death.

No specific treatment for acute hepatitis B exists. Which means that the treatment does not cure hepatitis B infection, only suppresses the replication of the virus, leading to reduced symptoms. However, the preventive vaccination for hepatitis B in newborns is a viable option to decrease the spread of the infection.

This site uses cookies to manage navigation and other functions. By using our site you consent to the placement of this type of cookie on your device. more information